We went to look at the tulip fields, but found to our regret we were late; they were already 95% harvested. We did find a few fields that were still mostly intact…

…but even as we watched a guy driving a …tulpenbeheader? was cutting them down. I imagine it’s old hat to someone who does it every year, and I know why they do it, but it sure pains me to see the flowers just being chopped down to wither where they fall. All that beauty just destroyed. Pff.

The other field we found was unbelievable. The colors were all so bright they looked unreal. Even the green was blinding. 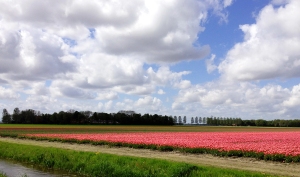 Having been thwarted in our mission to see the tulip fields, we drove looking for lunch. Along the way Carel spotted a guy who was loading big sheaves of what turned out to be would-be thatch for the house roofs of the wealthy. That’s a sight you don’t see often. 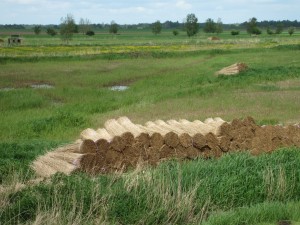 We drove into a small town called Marknesse looking for lunch and on an absolute whim decided to try a place that said it served Vietnamese and Chinese food. Im very leery of Asian food outside of big cities, and in the Netherlands in particular. This is a culture that does not use a lot of spice in their food. I like my Thai, Cantonese and Vietnamese blisteringly hot, please!

We went in, sat down, and I asked the lady who brought our menus if they served pho. It took about 5 mins and her fetching out a man from the back to get my question across, and then I saw understanding and regret dawn in their faces. “I have the soup,” the man said, making a face, “but not the vegetables. And without the vegetables, it is not right. It is not good. And it is not pho.” The lady explained that the correct greens were very hard to find, and prohibitively expensive if located. A bit later she came with our food, and went to fetch plates for us.

Meanwhile, I had removed a saucer from under something and was beginning to make a puddle of soy sauce and chili oil. I had been very excited to see the chili oil, sitting on the table along with the other standard condiments, like it should do in any Asian place (but doesn’t, here!). I was making a proper puddle after so long, and I was really happy. She saw me making my puddle and her face lit up. Then there was quite a bit of chatter in her hodgepodge Dutch and shaky English, my halting Dutch, and Carel translating while trying to hide a smile at it all.

The food was pretty good! And! we walked out with a big cupful of the chili oil, to my extreme happiness. I’d asked where to buy it (I’ve been looking for it since I got here and haven’t found it. Sambal Olek, yes, but it’s not as good and not nearly as hot) and she told me that they make it themselves, and then hesitantly offered to sell me some. I agreed immediately, and now I have a couple years worth of chili happiness for the price of 3 whole Euros. I put it in an empty bottle of Nashoba’s Northern Comfort, and it looks great. Ah, bliss.

This entry was posted on May 13, 2012 by Coyote. It was filed under Uncategorized .